What Happened at the Cross?

What Happened at the Cross 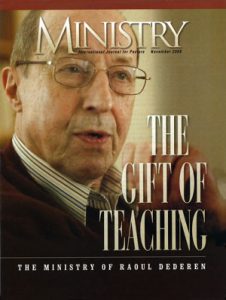 Raoul Dederen came to the Bible in the midst of humanity’s greatest crisis thus far, the Second World War (1942). “There was so much destruction, pain, and blood. I was often disturbed by the fact that my Catholic faith hardly answered my questions, especially about good and evil as well as about my future and that of Europe.”

One of the most relevant topics in those days was the doctrine of the millennium. Adolf Hitler, who reigned over most of Europe, had promised a thousand-year German Reich. “I refused to go along with Jean-Paul Sartre’s philosophy, very popular at the time. I refused to accept the view that man faces an absurd world with feelings of anguish and disgust.”

This led Raoul Dederen to study the end-time prophecies in Daniel and Revelation. He recalled meeting a peculiar people whose “grasp of the great controversy between Christ and Satan and their interpretation of biblical prophecies gave me some meaningful answers”.